Observatory Hill has long offered one of the loveliest vistas on campus—indeed, it is one of the defining views of the city of Madison itself.

From atop the hill near Washburn Observatory or mid-slope at the Observatory Drive Overlook, the visitor can enjoy gazing northwest to Picnic Point or across Lake Mendota to the north and east sides of Madison. From this spot, you can see almost the full extent of the Lakeshore Nature Preserve.

Most visitors to this part of the Preserve are drawn here by the inspirational views. Convenient short-term parking is available along Observatory Drive for brief visits to the overlook. Especially at graduation time, this is a favorite spot for students to pose in graduation gowns with families and friends—with the lake providing a stunning backdrop.

Although we often refer to Bascom Hill and Observatory Hill as separate geographical features, they are actually parts of a single glacial drumlin—a deposit of sand and gravel left behind by the last retreat of the glaciers in this region some 12,000 or so years ago.

As the glaciers departed and the climate continued to warm, plants and animals advanced into the region to occupy newly exposed soils and habitats. Not far behind these organisms, the first humans ventured into the Four Lakes region. Evidence of human inhabitants representing cultures from this post-glacial period (referred to by archaeologists as the Paleo-Indian Tradition) is relatively rare. However, a projectile point associated with the Paleo-Indian Tradition has been recovered from the top of Observatory Hill.

It is no surprise that the earliest people to inhabit this area would have been attracted to this prominent place. There seems to be a longstanding human affinity for high places like this one—especially where the view includes bodies of water. For many of us, taking in the broad sweep of land and water is a calming experience that refreshes the spirit.

Perhaps the spiritual attraction of high places can explain why ancestors of modern-day Wisconsin Indians chose to create effigy burial mounds here nearly 1000 years ago. We know that at one time there were at least five mounds on Observatory Hill. Today, only two are easily visible—in the shapes of a bird and a unique form known as a two-tailed water spirit. These two mounds are so special that they were recently listed on the National Register for Historic Places.

In addition to the burial mounds here, we also know that at the base of this hill there once stood an ancient Indian village site. The precise boundaries of this site are not known, but preliminary archaeological testing indicates that part of the village was north and east of Tripp Hall. It is possible that the village once extended eastward over areas that have now been disturbed by nineteenth-century farming and by the construction of Lot 34.

Read a detailed discussion of the Preserve’s Indian mounds and other archaeological features on the Native Americans and the Preserve page.

When the university was first established in 1848, the campus centered on Bascom Hill. In 1866, however, soon after the university became a Land Grant institution, the campus expanded to the west. The College of Agriculture’s new 198-acre “Experimental Farm” included all the land north of present-day University Avenue from Bascom Hill (Charter Street) to just west of present-day Willow Creek. Except for a single residence (now the Observatory Office building), the land was still undeveloped.

Within the next few years, the north-facing slope of Observatory Hill had been transformed by the construction of work roads and pleasure drives for carriages. Fences were built to support grazing by livestock, and fruit orchards were established.

Early work on the farm was directed by Prof. William W. Daniells, hired in 1868 as the university’s first professor of agriculture and chemistry. Daniells described the farm this way when he first arrived: “There were neither teams, buildings or tools of any kind on the farm. None of the land had ever been in cultivation, and although a portion of the land had been cleared much work was necessary to fit it for the plow.”

In his “University Farm Report” to the Regents, Daniells described his early accomplishments and plans for the 1869 planting season:

1. Four acres of corn cultivation
2. Two acres of potatoes
3. Plant for the vineyard, plowed in June, part of which was sown to corn and rutabagas for soiling purposes.
4. The northern slope next to the lake containing nearly 10 acres to be used for an apple orchard also plowed.
5. 200 evergreens, 3 to 6 feet high planted on the grounds
6. An arborvitae hedge planted between the stiles in the front of the university
7. A row of Norway Spruce, intended for a future protection against the south and southwest winds…
8. 1400 Evergreen Seedlings in cultivation for future use.

Beginning in 1878 the farm landscape was further altered by commencement of construction of the Washburn Observatory. Two years later, construction began on a Student Observatory adjacent to the much larger Washburn facility.

The University Expands to the West

By the early decades of the twentieth century, the Observatory Hill farm fields were still in production, but it was already becoming apparent that the growing university would eventually need this part of campus for academic buildings, recreation fields, and student housing. With the acquisition of new land during 1909-11 (including the Raymer Farm near Eagle Heights), agricultural activities began to shift farther west on campus. The orchard declined and it appears that the fields were used more for grazing than cultivation.

By the late 1920s, the northwest corner of Observatory Hill lower slope changed dramatically with the completion of the Tripp and Adams men’s dormitories.The realignment and expansion of Observatory Drive in 1934 (shifting the road northward down the slope) further partitioned the slope.

In the series of aerial images below, the orchard clearly shows signs of decline. Note also the presence of Elizabeth Waters Hall (completed 1940) in the lower left corner of the third picture.

Following the end of World War II, university enrollments exploded as veterans returned to seek college degrees supported by the GI Bill. With this expansion came demands for additional automobile parking for students and staff. Lot 34, clearly visible in the lower right corner of this image, was constructed over a period of several years to help meet this new need. The current campus master plan calls for the removal of Lot 34 in the future, thus re-establishing open space across the lower reaches of Observatory Hill.

Observatory Hill was long the site for a favorite winter pastime for UW-Madison students: toboggan sledding.

According to one source, the first slide on Observatory Hill dated to 1886, built by the UW Toboggan Club. In 1911, a new wooden run opened that was 600 feet long with a 600-foot cleared path onto the lake. The construction of the steel ski jump on Muir Knoll inspired the Class of 1933 to give its class gift to the Hoofers Club to help construct a proper concrete toboggan slide down Observatory Hill out onto the lake. The project included water lines for icing the chute, electric lights for night use, safety gates, and an automatic toboggan release, all designed for greater safety and speed than was true of the old chute it replaced. The Hoofers maintained and operated the new slide, including renting toboggans.

Unfortunately, this ambitious student recreational endeavor lasted only four years during the middle 1930s until the construction of Elizabeth Waters Hall required its removal. A study was conducted to determine the appropriateness of re-locating the slide to Muir woods. The planners decided not to rebuild, observing that:

“Wisconsin has the natural advantage of a beautiful lake and imposing landscape and unusual setting for its buildings…natural beauty (is) coming to be recognized more and more in this industrialized age…The construction of a toboggan slide in University woods [Muir Woods] would seem to endanger many of those values which should be conserved for Wisconsin’s future.”

These sentiments would be sorely challenged twenty years later, as the university grappled with constructing a new building in Muir Woods.

Even though the toboggan slide is long gone, students still find a way to enjoy a quick trip down the snow-covered Observatory Hill slope. The only difference now is that cafeteria trays now generally substitute for toboggans.

The 2006 Lakeshore Nature Preserve Master Plan envisions a variety of educational, cultural, and ecological enhancements that will improve visitor experiences and protect resources.

In the near term, no major restoration activities are planned for the Observatory Hill area. In the future, the campus master plan calls for the removal of Lot 34 when alternative parking spaces can be developed in ramps located elsewhere on campus. At that time, the parking lot will be restored to native vegetation using low plantings that will maintain the open view from Observatory Hill out to the lake.

Preserve managers will continue to manage invasive plants in the wooded areas along the lower portions of the hill. Trees will be maintained at the base of the hill to screen views of Lot 34 from the overlook. Selective removal of trees and shrubs may be required to maintain views to the lake.

Observatory Hill is easy to visit given its central location on campus. 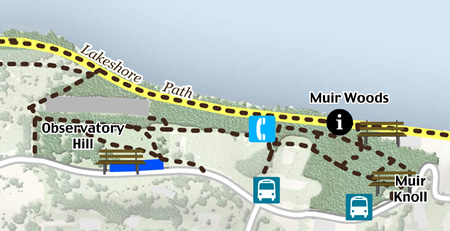 Several stops on the Campus bus #80 route will put you with easy walking distance of Observatory Hill. The easiest way to reach the overlook would be to get off the bus at Charter and Observatory Drive (Sewell Social Science Building) and continue walking west on Observatory Drive for several hundred feet.

Observatory Drive or the Lakeshore Path are both convenient bike routes to Observatory Hill.

You can reach Observatory Hill by foot along Observatory Drive or the Lakeshore Path. It is within easy walking distance of Muir Woods and Muir Knoll.

Short-term parking is available near the overlook for “attended vehicles” shown in the dark blue patch in the map above. A brief visit to the overlook will not earn you a parking fine. Please do not park in the spaces designated for permit parking. For longer-term parking, see the campus map for a convenient lot.