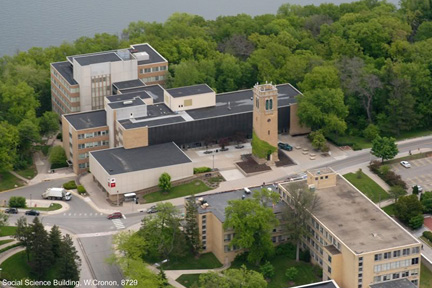 In the 1950s, as American academic interest in the social sciences was enjoying a burst of post-World War II popularity, UW-Madison began to look for a new building to house its departments of economics, sociology, and anthropology. After much deliberation, a site was chosen just east of Elizabeth Waters Residence Hall, at the western edge of what was then called Bascom Woods—soon to be renamed “Muir Woods” as one result of the ensuing controversy.
Since this eight-acre tract included some of the only remaining forested land on campus, a number of faculty members protested the idea that a natural area so near the heart of the university would be sacrificed to what in retrospect can be seen as the start of a great wave of construction that would transform the entire campus in the decade ahead.

The Capital Times newspaper spearheaded protests against the proposed site of the building, and there was even a bill introduced in the Wisconsin Legislature to prevent development in Bascom Woods. But it was soon amended to permit construction of the Social Science Building, which was completed in 1962.

The Social Science Building was arguably a milestone in the history of the Lakeshore Nature Preserve—though these lands would not actually be given that name until more than four decades later.

Professors in the Botany Department who were especially upset about the loss of remaining natural areas lobbied for the creation of a “Woods Committee” to monitor the health of campus forests and guard against future incursions into campus green space. The Woods Committee was the direct ancestor of the Lakeshore Nature Preserve Committee that today oversees policies and long-term stewardship of these precious natural areas that are such an important feature of the campus and the city.

One might say that the Social Science Building helped galvanize public opinion both on and off campus to mobilize for the protection of these lakeshore lands.