During the later part of the nineteenth century, a horse-drawn carriage ride through the countryside surrounding Madison was a favorite recreational activity for families and courting couples alike. Often the roads they traveled were designed to emphasize a leisurely tour along a scenic route-hence the reference to these byways as “pleasure drives.”

The university played an important role in assisting a local organization that built many of these pleasure drives in the Four Lakes area. This organization, the Madison Park and Pleasure Drive Association (MPPDA), eventually turned over all of its drives and park holdings to the City of Madison and its nascent Parks Department.

Although most people are no longer aware of this fact, many of these old MPPDA routes are still being used, but we now know them by their modern names: the Howard Temin Lakeshore Path, Lake Mendota Drive, along with several of the trails that wind through Eagle Heights Woods.

In 1866, soon after the university was designated a recipient of a Morrill Act land grant, funds were allocated to purchase the 198-acre farm situated just to the west of the original campus on Bascom Hill. In the years ahead, this new “experimental farm” would support a variety of agricultural enterprises such as orchards, livestock pastures, and research fields. A little-known consequence of early development on the university farm was the construction of a network of farm roads and pleasure drives in the late 1860s.

…one and three fourths miles of avenues have been constructed, three fourths of a mile extending along the shore of Lake Mendota. These avenues afford pleasant drives, and add greatly to the attraction of the grounds by giving an opportunity to visit in carriages localities from which may be seen some of the most beautiful landscape views in this vicinity….

This network of university pleasure drives and farm roads was open to the public and university community alike—spanning the general area from modern Charter Street on the east to Willow Creek on the west. Indeed, Willow Creek was the turn-around point at the western terminus of the university pleasure drives, since no bridge then spanned its banks. The construction of this turn-around destroyed part of the goose effigy mound.

By the early 1890s, another pleasure drive network had been constructed by George Raymer on his farm a couple miles further west of campus. (This farm would later be sold to the university in 1911 and become part of the Preserve and Eagle Heights Apartments area.)

A major destination for Raymer’s Drive included the Indian burial mound group atop Eagle Heights. Segments of Raymer’s drives became impassable during inclement weather, so that people tended to visit them only when fair weather was assured.

Bridging the old with the new

As the population of the city and university grew, so did the desire to expand publicly accessible pleasure drives. In 1892, an informal group of civic-spirited men formed to meet this challenge. Their initial project was to connect Raymer’s Drives on the west with the university’s road network to the east.

The first challenge to overcome in the westward expansion of the road network was Willow Creek (then known as University Creek), a meandering waterway with extensive wetlands along its banks. The initial design avoided the question of how to get over the creek altogether by proposing that the road could be built across University Bay on top of an existing sand bar! This CPL-U0167concept was widely promoted and is even shown on an 1892 plat map. In the end, though, the University Bay route was rejected in favor of building a “rustic bridge” over the creek.

Once this water impediment had been overcome, the “Bay Road” was laid out along the existing sand ridge that followed the edge of University Bay around to the base of the slope we now call Bill’s Woods. At this point the new road made a gentle inverted “S” curve ascending to the top of the hill. From here, the new road connected with Raymer’s Drive to form Lake Mendota Drive. This new road linking the two established networks was mostly completed during the summer of 1892, drawing on private donations of less than $7000.

The rustic bridge over Willow Creek (University Creek) as it looked in 1922. (CLP-U0167) Large version 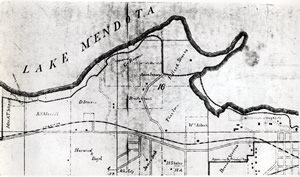 The initial proposal for the westward expansion of the pleasure drives on campus envisioned a road across University Bay. Note the dashed lines on the Raymer Farm parcel showing the existing Raymer Drives. (CLP-H0015) Screen size map Large format map 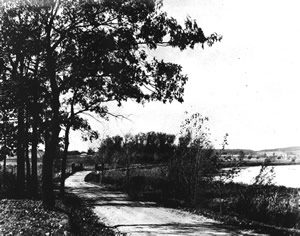 The newly constructed drives were a great success and led to the formal organization of the Madison Park and Pleasure Drive Association (MPPDA) in 1894. John M. Olin, a prosperous attorney, was the first president of the group. (Some may recognize his name in association with Olin House, the home in University Heights that he donated to the university for use as the chancellor’s residence.)

The MPPDA continued to build and maintain new drives in the Madison area, but over the next 44 years the mission of the organization expanded to include major public park building projects. Some of our most popular city parks today owe their existence to the MPPDA: Vilas Zoo, Brittingham Park, Glenway Golf Course, and of course, Olin Park. In 1938, the organization disbanded after completing final title transfer of its property holdings to the city.

In the Preserve today

The next time you walk around the top of the bluff in Eagle Heights Woods, or jog down the Howard Temin Lakeshore Path, imagine a time more than 100 years ago, when city dwellers used horse-drawn carriages to traverse these same routes—escaping the unpleasant urban noise and odors so prevalent during this era—to enjoy a little tranquility in natural areas along the Lake Mendota shoreline.

Perhaps not so surprisingly, this sounds a lot like the reasons we seek out these same places and experiences in the Lakeshore Nature Preserve today…

To learn more about the history of the Madison Park and Pleasure Drive Association:

Read John M. Olin’s president’s address given at the annual meeting of the MPPDA in 1895. “President’s Address,” in Report of Moneys Received and Expended and Work Done by the Madison Park and Pleasure Drive Association, for the Year Ending April 15, 1895, pgs. 3-6.