Big Woods is a parcel of old woods located located between the University Houses and the Eagle Heights Apartment buildings. Because it has been infrequently visited, except by children from the apartment complexes and occasional others, it has remained reasonably undisturbed. Its vegetation is more biologically diverse than most other woodlands in the Preserve.

Throughout the Preserve we have located many important archaeological sites demonstrating that Indians have lived in this area for thousands of years. The land that we today call Big Woods was unquestionably visited and used by native peoples long before European-American settlement, but the site has not to date been included in any systematic archaeological survey.

The land immediately to the east of Big Woods (near the corner of Lake Mendota Drive and University Bay Drive) has yielded artifacts from several ancient cultures-including material from the Paleo-Indian culture some 12,000 ago. We speculate that given the relatively steep slopes of Big Woods, it is less likely that archaeological surveys would yield artifacts here.

For more information, read Native Americans and the Preserve.

The second European-American to settle in the University Bay area, Anna Jansen, was reported to have lived in a dirt-floored log cabin near the corner of present-day Haight Road and University Bay Drive. Plat maps from the mid-1800s placed the cabin somewhere near the electrical substation currently at this location. We know little else about this woman or the fate of her cabin.

In 1895, John Olin purchased Anna Jansen’s property. He used part of the property (likely the flatter ground closer to the corner of Lake Mendota Drive and University Bay Drive), for a plant nursery. Olin was then the president of the Madison Park and Pleasure Drive Association and he was directing major tree and shrub planting programs along many of the new parks and roads managed by the group. One such planting project was for Bay Road—later known as the Willow Walk and currently part of our Lakeshore Path.

The residential plat map of Olin’s property (Fig. 1) highlights an interesting feature—a sharp “shepherd’s crook” bend in the road that traverses the property. This road is still faintly visible on the land today. This feature is also included on the 1905 map produced by the Madison Park and Pleasure Drive Association, showing this road as an extension of the pleasure drives first built in this area by George Raymer.

The Big Woods property came under university ownership sometime between 1909 and 1911. This coincided with several other major land purchases made by the UW Regents at this time, including acquisition of the much larger Eagle Heights Farm to the north, owned by George Raymer.

The university allocated part of the former Olin property to agricultural purposes, specifically the development in 1913 of a Pharmaceutical Garden (Fig. 2), dedicated to propagating and investigating plants with possible medicinal effects-reputedly the first such research facility of its kind in the nation. The remainder of the property was apparently left undeveloped until the mid-1940s (Fig. 3).

With the conclusion of World War II, demand for faculty and students housing resulted in several new residential developments. In 1946-47, the first phase of the University Houses complex for faculty appeared on the west flank of Big Woods (Fig. 4). The second phase of construction was completed in 1952. Then, in 1957, on land formerly used for the Pharmaceutical Gardens, the first Eagle Heights Apartment buildings (100 Group) were constructed along University Bay Drive-closing in the southeast edge of Big Woods. Finally, during 1958, additional Eagle Heights Apartments (the 200 Group) were constructed on the northern uphill edge of the woods.

By reading the landscape, we can speculate about the reason housing development occurred all around the margins of Big Woods while leaving this fairly mature forest reasonably intact. It would appear that topography played a key role in preserving this landscape. Although the land was not exceedingly steep, construction on this site would have required greater expense for clearing and leveling. With the availability of flatter ground nearby, and the need to build economically and rapidly, building in Big Woods was probably considered needlessly expensive.

The Biological Community of Big Woods

Big Woods, including an important narrow strip of wooded land extending to Lake Mendota Drive, was included within the newly defined boundaries of the Preserve in conjunction with the 2005 Campus Master Plan. This assures its protection as an important part of a “woodland corridor,” essential for the protection of migrating neotropical birds and for the large raptors that nest in the Preserve. The extension strip connects to Bill’s Woods and to the woodlands of Frautschi Point via the wooded canopy of Lake Mendota Drive. This woodland corridor also connects Big Woods, via the large trees and shrubs in the University apartment communities and then Eagle Heights Woods, with the largely wooded Village of Shorewood Hills.

Large old white oak, red oak, sugar maple, basswood, black cherry, hackberry, and other trees characteristic of the southern Wisconsin forest form the canopy of Big Woods. Although invasive species are present, except for garlic mustard and some large Norway maples, these are largely confined to the edges. Nannyberry viburnum, pagoda dogwood, and red elder are common in the understory. The soil is rich in humus, attesting to the age of the woodland. Many fallen trees and branches, rotting on the forest floor, provide habitat for animals along with a rich variety of mosses, fungi, and lichens.

Especially in the southeastern part of Big Woods, there is an outstanding abundance of woodland wildflowers, strikingly prominent in the spring. Before the canopy is fully leafed, thousands of wild ginger, Dutchman’s breeches, Solomon’s plume, Jack-in-the-pulpit, wood geranium, prairie trillium, and other native species carpet extensive areas of the woodland floor. There are several large patches of bent trillium as well. The most unusual wildflower species is great waterleaf (shown above), which is listed by the University of Wisconsin Madison Herbarium as a “Species of Special Concern” in Wisconsin. 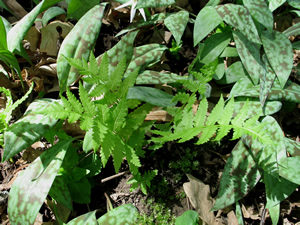 Raptors—including great horned and screech owls and Cooper’s and red-tailed hawks—hunt and sometimes nest in Big Woods. Many other birds use this woodland as a haven for their fledglings because of the lack of human disturbance. Red foxes, coyotes, and occasionally deer use the woodland, and raccoons, opossums, squirrels, chipmunks and many smaller mammals reside here as well.

To learn more about Big Woods:

The 2006 Lakeshore Nature Preserve Master Plan envisions a variety of cultural and ecological enhancements that will improve visitor experiences and protect resources.

The master plan has identified Big Woods as a “natural area management zone”—a designation that focuses activities on restoration of naturalized landscapes to desirable biological communities. Big Woods will be managed to support both a mesic and a dry mesic forest community.

In the near-term, Preserve managers will monitor Big Woods for invasive plant infestations and take appropriate action to remove them.

Visitors are asked to remain on the sidewalk that runs through this parcel. The steep slopes and fragile plant communities that characterize this part of the Preserve need to be treated carefully.

Big Woods is hemmed in on all sides by the Eagle Heights Apartment buildings. Currently there are no maintained walking trails in this area.

Take Campus bus #80 to the second stop on Eagle Heights Drive. This will put you within easy walking distance of apartment building #203 and the sidewalk leading to Big Woods.

The sidewalk to Big Woods can be reached by either the Lakeshore Path or Eagle Heights Drive.

The sidewalk to Big Woods can be reached by either the Lakeshore Path or Eagle Heights Drive.

The closest authorized parking for Preserve visitors is located at Lot 130, near the Class of 1918 Marsh and the main entrance to Picnic Point. Please do not park in the spaces designated for permit parking or for Eagle Heights residents.