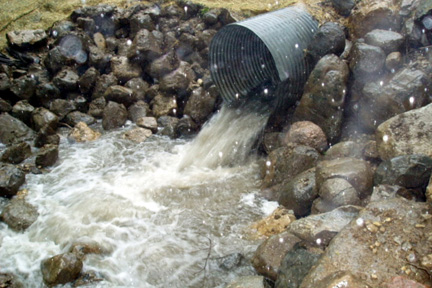 Hydrology and hydrologic process within and around the Preserve greatly influence the quality and health of its diverse biotic communities. A significant ridgeline runs east-west through the northern portion of the Preserve, bisecting Eagle Heights Woods, Bills Woods, and the base of Picnic Point. Areas north of the ridgeline drain north, while areas south drain toward University Bay Drive, where grassy swales infiltrate and conduct water to the lake near University Bay Marsh.

Gullies, rivulets, and outwash flows, with their attendant erosion, are the result of changes in the vegetation and built environment of the Preserve. Large areas under roof and asphalt in the surrounding area convey excessive storm water downhill rather than infiltrating it at the source. A lack of ground layer vegetation in many of the wooded areas throughout the Preserve allows surface water to erode organic material in the soil. Concentrated areas of storm water runoff from culverts and pipes create point-source erosion problems. The physical impacts of these several processes can be seen throughout the Preserve.

Additionally, the Willow Creek Watershed—which is much larger than most people realize—has a substantial impact on the quality of water in Willow Creek and University Bay. 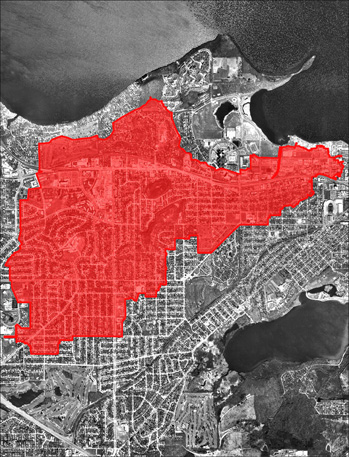 The physical boundaries of this watershed extend well beyond the UW-Madison campus and include much of west central Madison as shown in the map. Storm water from this large urban area conveys with it pollutants from city streets, waste from yards and parking lots, and sediment from construction sites. The hydrologic graph of the Willow Creek Corridor shows sharp peaks and valleys, indicative of major drainage events during which millions of gallons of storm water enter the Willow Creek system and ultimately end up in University Bay. Aerial photographs illustrate the gradual enlargement of the silt plume that has formed in University Bay, a problem that cannot be addressed in the Master Plan but that certainly requires attention in the future.

The Preserve does not exist in isolation from the surrounding city. Growth of the University of Wisconsin campus, particularly West Campus, as well as the City of Madison, has had far-reaching impacts on Preserve lands. Storm water runoff from impermeable developed adjacent land creates adverse impacts in many parts of the Preserve. The greatest of these impacts occurs at Willow Creek, which carries runoff from a large and highly developed urban watershed on the west side of Madison. Willow Creek exhibits extreme peaks in flow from storm events and spring floods, contributing to the growing sediment plume that is rapidly filling the western portion of University Bay.

Other areas also suffer from storm water runoff that is concentrated and conveyed from beyond the edges of the Preserve. For instance, a newly installed outfall structure at Raymer’s Cove is already being undercut and washed out by the excessive volume and velocity of storm water arriving from Eagle Heights and Shorewood Hills. Storm sewers along the Howard Temin Lakeshore Path continue to be upgraded, temporarily affecting the aesthetic experience of the path, in an effort to manage the high volumes of runoff from the developed campus to Lake Mendota.

Stewardship strategies for the Preserve watershed

The 2006 Preserve Master Plan made the following recommendations for managing the significant challenges for managing watershed issues for the Preserve (click on map for larger version).

Read an article by Paul Zedler and Cathie Bruner on the UW’s stormwater management policy.