Although it’s easy to understand that you’re catching a glimpse of history when you see an old foundation or find a pile of construction stones in the middle of what is today a forest, it’s sometimes harder to recognize that the forest itself is a historical document that has much to teach if only you know how to read its record. One of the better places in the Lakeshore Nature Preserve to begin to learn this skill is at the northwest corner of the Biocore Prairie, right where the field meets the woods.

Stand on this border between forest and prairie, and first look back up the hill to the south. You’ll see a line of scattered trees reaching back toward the horizon. Why are they here in the middle of this field?

The answer is that they mark an old fencerow, which itself reflects the property boundaries that were first laid on this land way back in 1834 when this land was first surveyed under the terms of the great Land Ordinance of 1785-one of the founding documents of the United States, which laid out the rules for how the “public domain” would be surveyed and sold into private hands.

If you compare this fence row with the quarter section lines established by the 1834 survey, you’ll see that these trees perfectly trace the property boundary established two years before Madison became the territorial capital of Wisconsin.

Why are the trees still here? Because the old 1834 property boundaries provided the lines along which agricultural fields were eventually laid out when this land began to be farmed. Farmers never plow their fields all the way to its margins, so a fencerow is always a place where weeds and shrubs and trees can find refuge from the plow. Whenever you see large open-grown trees lined up in the middle of a field for no apparent reason, you are probably seeing an old property boundary.

These trees in the field are not the only evidence you can find here of the farmers who once worked this land. Trace the line of the trees in the field northward down the slope to where they meet the forest, and follow the trail that enters the woods at just this point. Look closely, and you’ll find an old fencepost still standing here from the days when this was an active farm.

Now, stand by that fence post and look to the west, back toward University Bay Drive. Especially in winter, or in spring or fall when the leaves aren’t so thick on the trees, you should see a row of mature open-grown trees marching their way in a straight line through the forest, surrounded by much younger and smaller woody vegetation that is growing up around them and gradually engulfing them. 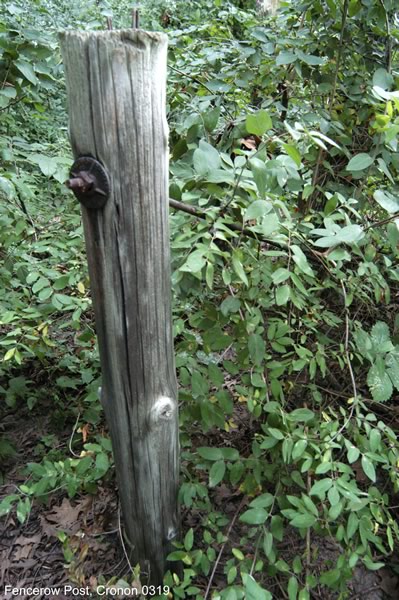 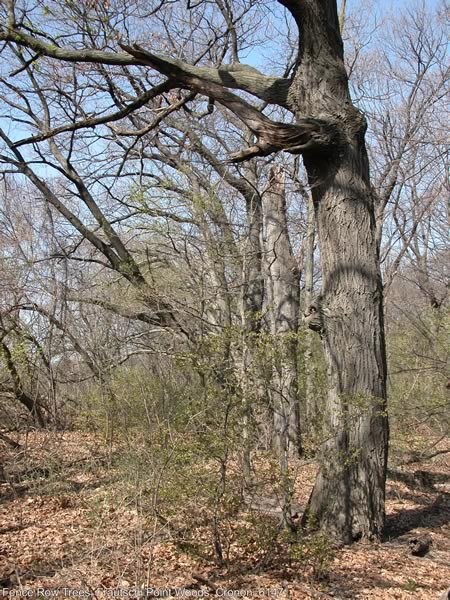 Whenever you see a straight line like this in a natural setting, be on the lookout for evidence of human influence. In this case, you already know the reason why these old trees are here: they grew up along the fencerow when this land was an open field or pasture, just like their neighbors higher up the hill that you’ve already seen marking the old fencerow. These are fencerow trees too, but because the forest is gradually reclaiming the field, these have been engulfed by younger trees and shrubs, so that they’re now harder to detect than the ones that are still in the open.

All of these things-the mature trees, their arrangement in a straight line, the old fencepost, and the 1834 surveyor’s notes that created these boundaries in the first place-are historical records that help explain why this natural forest now looks the way it does.

Here as in so many other places, nature and humanity have shaped each other in myriad ways, and have left their signatures on each other’s histories. Learning to read landscape history in this way is one of the most valuable and intriguing skills you can gain when visiting the Preserve. Just look closely and keep asking why things are the way they are.