The Class of 1918 Marsh is a tiny remnant of a large wetland that formerly
covered all of the area now occupied by playing fields, parking lots, and the Nielsen Tennis Stadium. Fifteen thousand years ago when the glaciers receded from this part of Wisconsin, the marsh was connected to Lake Mendota; later a sand bar built up that isolated it from the lake.

The university acquired the land in 1910 and began to experiment with draining the marsh to grow crops, a difficult prospect given that the area is lower than the lake. Tiles were laid and a series of pumps installed. The experiment was considered successful, but by 1965 the tiles came loose and the area reverted to wetland. At this point, the campus was expanding and the university administration planned to use the area for playing fields and parking lots. In the interim they used it as a landfill. 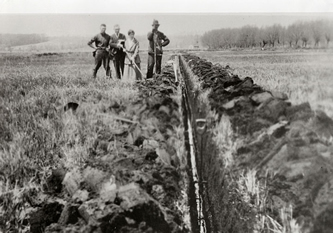 Fortunately, in 1969 an environmental studies class chose the marsh as its class project. After collecting a great deal of data and making allies of the local press, they convinced the university administration to rethink its plans and the land was saved as a wildlife refuge and teaching and research area. It is named for the Class of 1918 because this class agreed to reallocate money that they had donated during their 50 year reunion for a Japanese pond to the new project of enhancing the marsh.

The 1970s saw dredging the marsh, building the trail around it, and the addition of a series of interpretive signs, which since have been lost due to vandals. There also were several attempts to establish prairie around the edge.

Unfortunately, during the last 25 years little has been done to maintain the marsh, in spite of the interest of a large number of people and the development of several management plans. It suffers from runoff from nearby construction sites, parking lots, and fertilized playing fields. In addition, the field on the south side of the marsh is used by the plowing crews to store snow (with its accompanying salt and debris) in winter.

Read Friends of the Preserve newsletter articles by Roma Lenehan, “University Bay: Preservation and Change” and “Saving a Marsh: an Environmental Success Story”.

What the original restorationists sought to accomplish

One of the best descriptions available for the original restoration project was produced by James H. Zimmerman, a naturalist at the UW Arboretum, who with his wife, Elizabeth, helped spearhead the restoration of the Class of 1918 Marsh. He produced a booklet in 1972 as a guide to the interpretive walk around the marsh, and his discussions there remain an invaluable guide to the marsh. Richard McCoy and Susan Slapnick of the Friends of the Lakeshore Nature Preserve digitized Zimmerman’s original booklet, and we have included two key entries—describing the restoration project and the history of the marsh—below.

The purpose of this small wet marsh—amid playing fields, parking lots, and roads and buildings—is to foster an appreciation of marshes and to demonstrate how wildlife and people can coexist. With proper understanding and public cooperation, the similar needs of man and of wildlife can be met side by side: living space, food, protection from hazards and disturbance, and a clean environment.

The developments here, including earth-moving, the nature trail, interpretation signs, and plantings, were made possible by generous donations from the UW Class of 1918…

This marsh is noteworthy in five ways:

1) It is a man-made restoration; successes and failures may be studied here for future understandings of the ecosystem.

2) It is an educational facility, bringing people and the natural environment intimately together. Here man may also derived recreational benefit, while wildlife may eventually become more accustomed to man, like the chimney nesting storks of Europe.

3) It would be too small a marsh to hold much wildlife were it not for its proximity to a complex of lakes in the Wisconsin River flyway. Attracted to the waterway, and perhaps bound to it by traditions handed down, large numbers of water birds expect to find and almost desperately seek marshes for resting, food and nest sites. So few marshes are left that every small one receives abnormally intense use.

4) It is now in the early very weedy stages of development following recent construction causing erosion and siltation. The upland and lowland weeds are not being cut because: (a) they provide important wildlife foods and immediate temporary cover; (b) natural succession can be studied here. Stabilizing of the vegetation and clearing of the water will come only with cessation of construction and soil disturbance in the entire watershed.

5) Its existence is testimony to the sizeable body of people in city and on campus who appreciate nature. We hope this project will encourage marsh restoration and interpretation elsewhere…

History of the marsh, by Jim Zimmerman, 1972

This entire nearly level basin (some 80 acres) was once filled with peat. It is bounded on the west and north by University Bay Drive, and on the southeast by the Natatorium and Marsh Creek. On the south it once graded up into prairies and fields about where Marsh Lane is now.

Peat accumulates where waterlogging prevents access of oxygen so that bacteria cannot feed on plant remains. Kept wet by runoff and springs, the basin had been a soggy area for over 10,000 years, although it was sometimes above the level of Lake Mendota . As the last glacier retreated, damming the Yahara Valley with deposits of mud and gravel, this basin was probably a bay of the lake at a high-level stage. Study may show that the first peat to be laid down was of sphagnum and wiregrass sedge, containing pollen of spruce and fir; for most of our peat deposits began as floating bogs like those of bays in our present northern lakes.

The lake may have backed up to higher levels at more recent times because of dense vegetation and beaver dams at the outlet; but around the turn of the century, it was getting lower because of erosion of the outlet. This basin was probably a sedge meadow then. In 1912, the Tenney Park Locks were installed, raising the lake above the level of this peaty basin.

To put the peat meadow to use, a leaf was taken from the thrifty Dutch: tile the fields, build a dike and use a pump. The filled dike, built on an ice-push-up-ridge, became University Bay Drive ; the faithful pump in the metal shed nearby continually removed seepage coming from the peaty field and from the lake for over 50 years. A sign on the pumphouse explained this pilot land reclamation project. With proper fertilizer, the peat field yielded excellent crops of corn. Unfortunately, not all lowlands had a lake to protect them from summer frost damage; so following the University’s advice to drain and farm the lowlands did not always meet with such success elsewhere.

Farming had increased wildlife abundance because the field provided abundant food – both waste corn and the weeds perpetuated by soil disturbance. Shorebirds, ducks and geese that circled the lake would drop in at the field in spectacular numbers. The adjacent and slowly encroaching weedy University Dump (now Lot 60) and the marshy ditches helped also, and together they attracted bird watchers from far and wide to see rarities like pipits, snow buntings, snow and blue geese, phalaropes, white crowned and Harris’ sparrows, and short-eared owls. Pheasants thrived on the corn also.

Wildlife use intensified in 1967 when progressive oxidation of the drained peat deposit had finally caused the deeply-laid drain tiles to appear on the surface, interfering with plowing and harvesting machinery. The pump was turned off, and the flooded ripening crop of corn was soon discovered by all of Madison ‘s mallards and teal, which began commuting daily over the city. One could stand at Lot 60 and see hundreds of mallards descend from the sky at sunset. Still more migrating waterfowl came in from the lake that fall, and in the spring of 1968, many water birds stayed to nest as the 30-acre flooded field began to provide water plants for cover. This became the spot to see, with ease, beauties like green-winged teal, ruddy and shoveller ducks, and the elusive gallinules and rails of the deep water marsh.

Argument arose over the use of the land, which was avidly sought for parking space and athletic fields, as well as for wildlife habitat accessible to biology classes and nature-lovers. The present compromise divides this land between these three uses. To some extent they overlap, since parking makes the area accessible to more wildlife viewers for recreation, and the playing fields, when not in use, provide quiet buffering open space around the present small marsh for the flying, feeding and roosting needs of birds.

Plans for restoring the marsh again 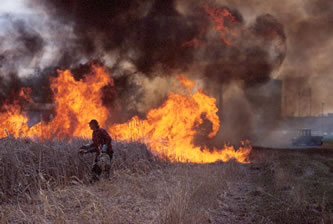 In 2006, UW-Madison completed its first-ever master plan for the Lakeshore Nature Preserve. Included in an appendix to that plan was a detailed discussion of goals for a major restoration of the Class of 1918 Marsh. We reproduce those goals below.

The Class of 1918 Marsh has long provided an exceptional site for faculty and student research, and for class exercises in habitat restoration. It also offers wonderful opportunities for marsh visitors to explore and appreciate nature. Since 1997, instructors working there have informally designated their collective venture “The Urban Marsh Field Station.”

This is a long-term vision that will play out over perhaps 50 years. We anticipate repeated attempts to test alternative management policies and biological communities. We anticipate creation of six zones of wetland plant communities and open water areas, specifically: 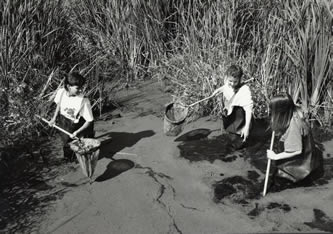 Goals – the marsh plan seeks to:

To achieve this vision, a reliable supply of high-quality water is required:

Principles for implementation of basin dredging and restoration:

In manipulating water levels in the marsh, the following biological principles (among others) should be kept in mind:

This plan anticipates that the boundaries of Class of 1918 Marsh will be kept at roughly their current locations. The open spaces of the recreational fields will stay as they are so they can continue to provide valuable educational opportunities and leisure activities for UW-Madison students and others. Together, these recreational lands and the Class of 1918 Marsh contribute to an attractive open space and an expansive vista on the western margins of the campus.

The plan envisions an accessible trail from the south side of the marsh to an observation area so that visitors of all abilities will be able to enjoy the views, the wildlife, and the experience of the marsh.

Finally, this plan reaffirms the vision and values of the far-sighted conservationists who restored and dedicated the Class of 1918 Marsh in 1972. We will continue to care for the marsh, learn what we can from restoring and managing it, and share our knowledge to promote wetland restoration efforts elsewhere. 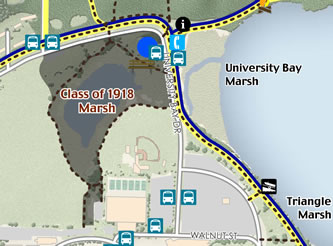 Getting to the Class of 1918 Marsh is easy: hop on your bike, grab a bus or jog on over!

Campus bus #80 makes regular stops across from the entry gate of Picnic Point on University Bay Drive or at the first stop on Lake Mendota Drive.

Take the Lakeshore Path from Oxford Road (west end of path) or Park Street (east end of the path) to the Picnic Point entry or to near the basketball court on University Bay Drive.

In addition to the main Lakeshore Path, there are several easy walking paths throughout this area—both gravel and paved. Make sure to walk out onto the observation deck into the marsh boundary.