This 8-acre triangular patch of woodland lies immediately east of Biocore Prairie, and is named for the Caretaker’s House that once stood at the southwestern apex of the triangle.

The land here slopes fairly steeply down toward the lake, giving it a north-facing aspect. This means that these woods receive less direct sunlight than is true of some other parts of the Preserve, making the soil here moister and cooler. The tendency of the habitat is thus toward mesic (moist and cool) vegetation.

Like Second Point Woods to the northwest, the trees here are a complicated mixture of older, more mature individuals that once grew in a more open forest, and much younger individuals that are successionally shifting the overall vegetation in a mesic direction. The oldest trees are principally red oaks, some of them spreading their branches wide to indicate that they once grew in an open pasture or savanna, and others showing the more vertical growth patterns we associate with trees that grew in a forest. Beneath these older oaks, younger maples, basswoods, and slippery elms are becoming a more important part of the understory, pointing toward a future in which oaks will be a much less significant part of these woods.

Read about the Caretaker’s House… 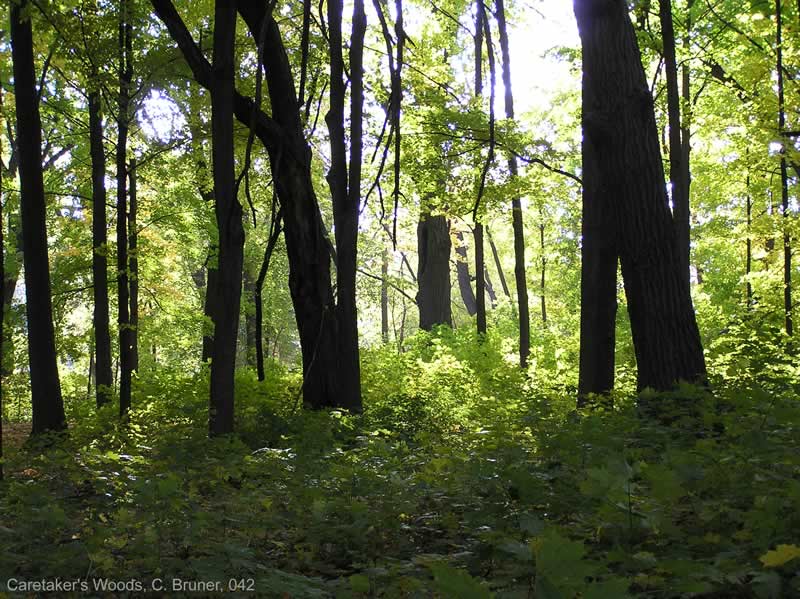