The Biology Core Curriculum (Biocore) is a four-semester laboratory-intensive honors sequence at UW-Madison. In 1997, Biocore students and staff began a long-term project to restore an abandoned agricultural field near Picnic Point to tallgrass prairie. The Biocore Prairie is a central field site for two Biocore lab courses and for summer independent research projects, service learning, and collaborative research and teaching efforts with many other UW-Madison programs.

Since this project started, successive groups of Biocore students have helped plan and carry out restoration research. The Biocore Prairie team has been hand-pulling weeds, burning, preparing soil, sowing prairie seed, transplanting prairie seedlings, and mowing fields and fire breaks. Our hard work is paying off with an expanding area of developing prairie.

The field occupies approximately 11 acres; we started with a small portion and have gradually taken on more. The first experiments compared three procedures for controlling the weeds and non-native grasses that covered the site when we began: mulching, repeated rototilling, and repeated mowing plus herbicide. We carried out the treatments from spring through fall 1998 on a series of plots in the northeast corner of the site.Then, in November, students planted each plot with a seed mixture containing 61 prairie species.

The experiment was repeated on another series of plots over 2 growing seasons and planted in November 2000. We were very disappointed to find that none of the procedures was successful in controlling the weeds. This area is particularly challenging because decades of growing weeds has resulted in a large bank of weed seeds in the soil. Nevertheless, we continue to work on it, removing weeds and adding prairie plants each summer. 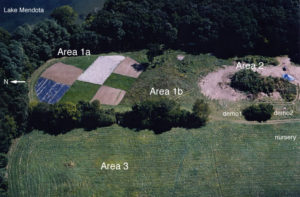 We realized that establishing a prairie would be a long-term process and wanted students and visitors to be able to see prairie plants in the present. Therefore, in 1999 and 2000 we set up two demonstration gardens by the very labor-intensive process of growing small prairie plants in a greenhouse, transplanting them to the site, and weeding and watering them as necessary. These are now thriving and have different flowers coming into bloom throughout the season. They attract birds, butterflies, and other insects.

We have been much more successful in establishing a prairie in the southeast corner of the site. This area had been covered by a huge dirt pile (Area 1b in the photo above – this was put there during construction of the UW hospital).

Physical Plant staff removed the pile and graded the site for us. In the spring of 2001, Westside Agricultural Station staff helped us treat the area with herbicide and then drilled in prairie seed. We have been very pleased to see prairie species become established and weeds diminish each year.

This process has been helped by intense work each summer by Biocore staff, student helpers, and volunteers, who have been removing weeds and transplanting prairie plants into the site from our nearby nursery garden. It also has been helped by burning the prairie each spring as fire is an important tool for establishing and maintaining prairies. In the fall of 2005, Biocore students surveyed the area and found 31 of the 57 prairie species that had been planted.

The research grid map (below) is from a 2004 aerial photo of Campus on which Sam Batzli did the grid overlay using GIS software. The grid was originally surveyed and monumented by Dan Rodman (formally from UW Civil and Environmental Engineering). 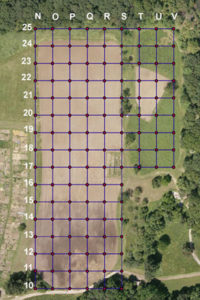 We knew from experience that the rest of the weedy field would need drastic treatment if we were to be successful in establishing a prairie. Our next experiment was to grow (with the help of staff from the Westside Ag Station) Roundup-Ready soybeans there for 3 years and to treat the area several times each year with the herbicide Roundup. In November 2005, Biocore students planted 6.5 acres with 58 prairie species. Current and future students will be assessing the results.

The value of Preserve stewardship and restoration for education

The Lakeshore Nature Preserve is a superb resource for teaching and learning. It is close enough that students can work there during their normal laboratory periods. They are very motivated and engaged by the prairie restoration project because it is not just a classroom exercise. It is very real work in the world, and is contributing to long-term stewardship goals as outlined in the Preserve master plan.

In addition to the class experiments, many students have undertaken individual research projects during the summer. For example, students have done the following:

We welcome collaborators, volunteers, and others interested in prairie restoration to join our efforts!