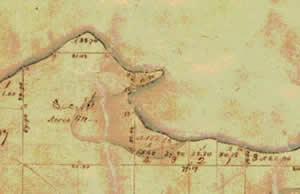 The field notes and plat maps of the public land survey of Wisconsin are the earliest systematic historic records we have for Wisconsin’s landscape history. Because the surveyors located their points by measuring distances and bearings to pairs of trees near the corner points they were establishing, these records are now an invaluable source of information about early 19th-century vegetation prior to land sales by the federal government and hence, in most locations, well before most European American settlement.

The survey of Wisconsin was conducted between 1832 and 1866 by the federal General Land Office. This work established the township, range and section grid; the pattern upon which land ownership and land use is based. The survey records were transferred to the Wisconsin Board of Commissioners of Public Lands after the original survey was completed. Since that time, these records have been available for consultation at the BCPL’s office in Madison, as hand-transcriptions, microfilm, and now as internet electronic images.

How to Use this Collection 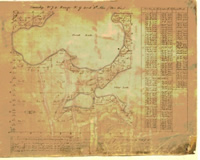 Reference information about how to use this collection, how the land survey was made, and various technical issues associated with using these data, are in described in detail in the following sections:

Be aware that the survey records can be challenging to interpret! The best advice for using this resource is to read through many records to become familiar with the terminology used and the flow of the records. Challenges come from at least four sources:

John Curtis’s classic The Vegetation of Wisconsin: An Ordination of Plant Communities (Madison: University of Wisconsin Press, 1959) made heavy use of the original land survey notes.

A pioneering use of the land survey records to reconstruct early vegetation for Dane County can be found in R. S. Ellarson, “The Vegetation of Dane County, Wisconsin, in 1835,” Transactions of the Wisconsin Academy of Sciences, Arts Letters 39 (1949), 21-45.

For an early and still very useful overview of the benefits and challenges associated with using these data, it is still worth reading Eric A. Bourdo, Jr., “A Review of the General Land Survey and Its Use in Quantitative Studies of Former Forests,” Ecology 37:4 (Oct. 1956), 754-68.

Lyon’s sketch map of Township 7 North, Range 9 East, 4th Meridian, (T7N R9E) showing what is now Eagle Heights, the Class of 1918 Marsh, and the base of Picnic Point. 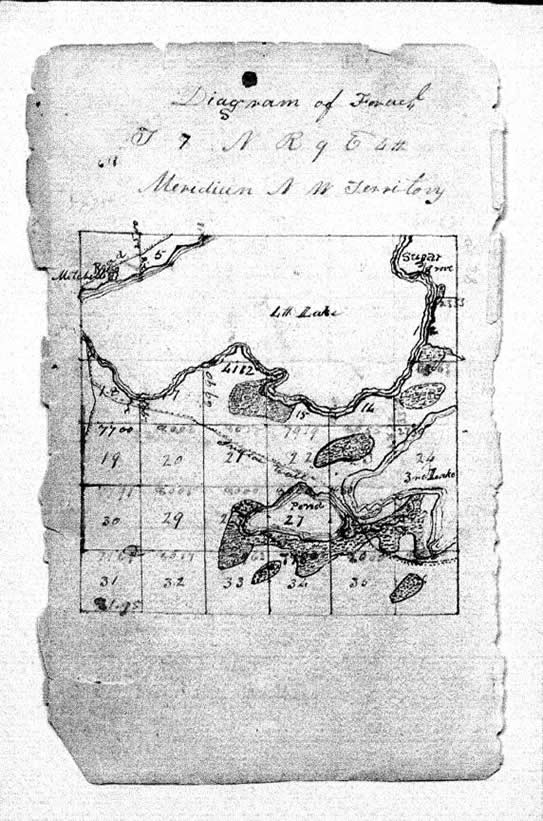 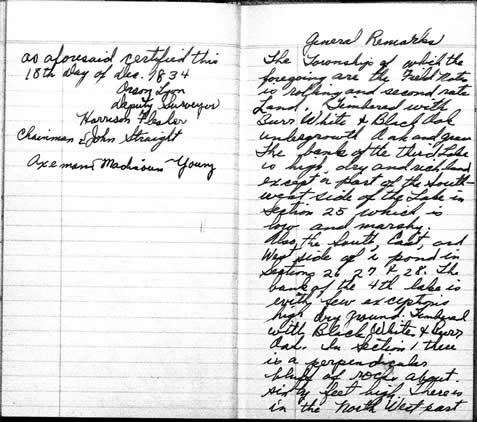 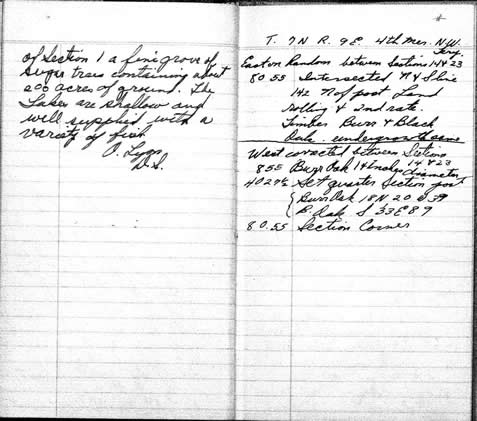 The meander notes for T7N R9E contain a few additional data points relating to the shape of the shoreline, with a few additional trees being mentioned in passing, they can be viewed on the UW-Madison’s Digital Collection for Wisconsin Public Lands Survey Records website.

At the end of the field notes, Lyon wrote a general description of what they had observed during the survey of the township:

Left-hand entry, between sections 16-21, is roughly 1/2 mile due west of mouth of Willow Creek.

Right-hand entry, between sections 16-17, is in vicinity of Eagle Heights Woods. 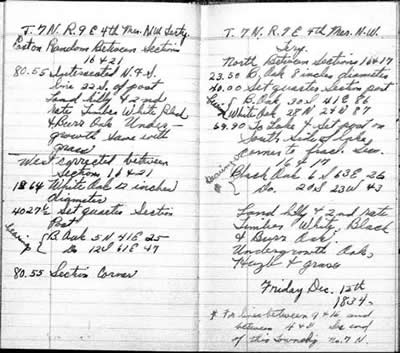 Lower left-hand entry, continued in general description at top of right-hand page, describes area between sections 9 and 16, the survey midpoint of which is in Lake Mendota Drive just before it makes acute southeastward turn before the Frautschi Point parking lot. 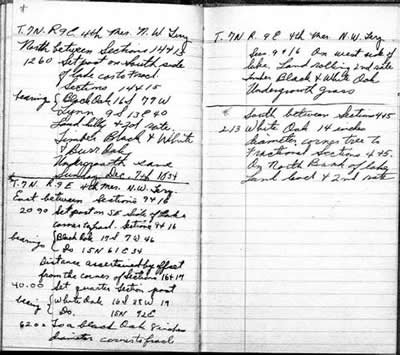 Upper left-hand entry, between sections 15-16, records a line immediately west of the modern course of Willow Creek until it intersects the lake. The following entry, beginning “Over lake…,” records the only data point we have for Picnic Point itself.

Most of the entry on the right-hand side of this page is for the mile south of modern State Street, well away from the lake, but it is included here because the end of this traverse is the section point lying just south of Bascom Hall near the top of Bascom Hill, and is thus relevant to the vegetation of the ridge on which the university would start to be constructed a couple decades later. 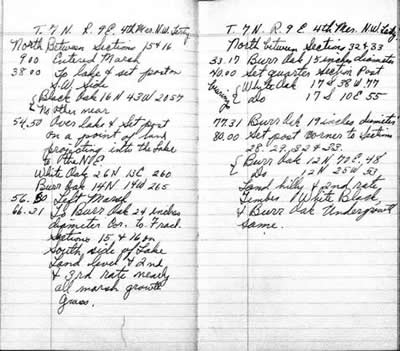 Right-hand entry, between sections 15-22, is not really directly relevant to the Preserve, but it records the vegetation along the line that is today roughly the line of Linden Drive, with the midpoint being roughly in the vicinity of the Stock Pavilion (unconfirmed). 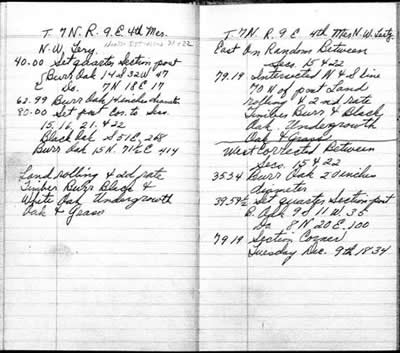 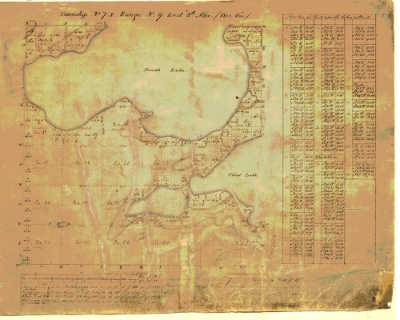 Diagram of a Point of Land

Secs 10 and 15, Township 7 North Range 9 East . The surveyors were so impressed by Picnic Point that they chose to make a separate plat map for it. 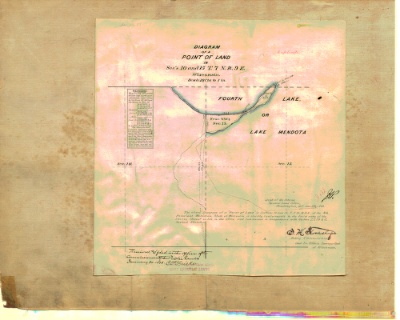 What is Land Survey Information?

The land area that is now known as the State of Wisconsin was surveyed by the federal government between 1833 and 1866. The survey was done in order to divide the vast public domain into salable-sized lots that could be sold, or otherwise divested, to raise funds for the federal government and to encourage settlement. The work was done using the Public Land Survey System (PLSS), which divides land into six-mile square townships and one-mile square sections. This system was used in surveying the public domain lands of the United States beginning in eastern Ohio in 1785. The survey work was done by the General Land Office (GLO), an agency of the Treasury Department until 1849 and thereafter a part of the Interior Department. In 1946, the GLO was merged with the Grazing Service to create the modern Bureau of Land Management (BLM), which continues to have responsibility for the Public Land Survey on public domain lands. The original surveys are often referred to as the Public Land Survey or the General Land Office Survey.

The following material will provide a general description of the Public Land Survey System and instructions for how to interpret the records of the survey. There are, however, many variations and exceptions to the standard procedures found within the survey records. During the three decades that the survey was conducted in Wisconsin, the instructions to the surveyors changed and evolved. Also, the survey procedures occasionally had to be adapted in the field to meet unusual conditions. Use this information as a guide, but realize that there may be records that do not fully match the standard.

How to Interpret and Use Plat Maps

The starting point of the public land survey in Wisconsin is located on the Wisconsin – Illinois border about 10 miles east of the Mississippi. This point, known as the initial point, marks the intersection of the baseline, which is also the southern state boundary, and the principal meridian, which is a line that runs due north from the initial point. In Wisconsin, this line is known as the Fourth Principal Meridian (abbreviated as “4th Mer.” in Lyon’s field notes). This line is an extension of the Fourth Principal in Illinois that has an initial point is in the west-central part of that state. The numbering of the townships in Wisconsin, however, is separate from the numbering in Illinois.

Each township is numbered based on how far north it is located from the baseline, and how far east or west it is located from the principal meridian. For example, the city of Madison is in a township that is seven townships north of the baseline and nine ranges east of the principal meridian, thus it is in what is known as Township 7 North, Range 9 East.

A note on the word township: this word is used in several different ways in this text and in other land descriptions. First and foremost it describes a six-mile square area laid out as part of the Public Land Survey System, this is also known as a congressional township because the land surveys were originally directed by congressional action, this area can also be described as a survey township. These have a numerical description such as Township 7 North, Range 9 East. The word township is also used to describe a unit of local government, a civil township. Here the name is shortened to “town” such as the Town of Vermont, the Town of Rome, or the Town of Orion. While these civil townships often share the same geographic boundaries as a congressional township, sometimes they include larger or smaller areas. To confuse the issue even further, the word township is also used to describe the east – west line of six-mile square blocks between to adjacent township lines.

The system of measurement used in the original public land survey is based on the statute mile. It is subdivided into chains and links, not feet and inches. A measuring chain is 66 feet long and there are 80 chains in a mile. Each chain is composed of 100 links each of which are 7.92 inches in length. Because there are 100 links in a chain, the measurement can be expressed as a decimal, i.e. 12.59 chains is equal to 12 chains and 59 links. To convert measurements from chains to feet, simply multiply the number of chains by 66, i.e. 12.59 chains x 66 (feet per chain) = 830.94 feet.

How the work was done

The work of the Public Land Survey in Wisconsin was done under the direction of a Surveyor General who was responsible for the surveys in a large area. The earliest surveys in what is now Wisconsin were done under the direction of the Surveyor General for the states of Ohio, Indiana, and the Territory of Michigan. This office was headquartered in Cincinnati, Ohio until 1839 when it was moved to Dubuque, Iowa. At that time a new survey district was created that was responsible for the surveys of the Wisconsin Territory, which included what would become the states of Wisconsin, Iowa, Minnesota and the Dakotas from an office in what is now Dubuque, Iowa.

How to Interpret and Use Field Notes

The work of the public land surveys was recorded in small notebooks that became the official record of the surveys. Collectively these are known as the “field notes.” Within an individual township notebook, there is a predictable progression of entries. Most field notebooks include the following basic entries:

This page includes the legal description of the township being surveyed, name of the Deputy Surveyor and the dates that the work was done. Sometimes the survey crew is also listed here, and occasionally on the next page.

This map was drawn in the field as part of the fieldwork.

These are the details of the work done as the surveyors ran the individual section lines. Along the left side of each page are the measured distances in chains and links. The basic entries are for the section corner and quarter-section corner. For each of these points the entry will also list the species and diameter of the bearing trees as well as the direction and distance to those trees. Other entries along the section line will include a variety of items noted by the surveyor. These include entering or leaving fields, swamps, timber or other major landscape or other vegetation types, crossing streams, or intersecting trees directly on the survey line. At the end of each section line, the surveyor wrote a brief description of the mile of line just traversed. This description included the surface of the land, the quality of the soil, the tree species along the line in order of dominance, and the undergrowth.

At the end of township’s survey, the surveyors wrote a general description of what they had observed during the survey of the township.

The last portion of each township is an affidavit or certificate by which the surveyor swears to have done his work properly and in compliance with the terms of his contract.