Insects are the most diverse and abundant of all terrestrial animals. A full listing of the Lakeshore Nature Preserve’s inhabitants has never been tabulated, but it is safe to say that the number of insect species is larger than all other groups combined.

Insects play crucial roles in ecosystem functioning. As pollinators, they contribute to the reproduction of most flowering plants. Insects are often the first decomposers of dead plants and animals, and introduce microorganisms that continue this process and release nutrients for new plant growth. Insects serve as food for other animals, such as fish, birds, and amphibians.

None of the ecosystems represented at the Lakeshore Nature Preserve could exist in their current form without insects. Insects often have very specialized requirements, so each species is typically found within a particular microsite, such as in the soil, under bark, or along the underside leaf veins of a particular tree species. Each also has a specific rhythm as to time of year and day when they are most active.

Numbers in the text below correspond to numbered photos in the Insects of the Preserve: a photo album.

Types of insects you can find at the Preserve 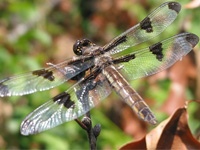 The lakeshore environment attracts a number of unique insect orders that require water to complete their life cycles. Both dragonflies (2.1) and damselflies (2.3) and (2.4) have aquatic immature stages. Adult (2.2 pictured) and immature dragonflies feed on small insects including mosquitoes.

Many other insect orders require water to develop. You can expect to find mayflies (Order Ephemeroptera), dobsonflies and fishflies (Order Megaloptera), and caddisflies (Order Trichoptera) near the lake. Some members of the true flies, beetles, and true bugs also have aquatic or semi-aquatic species. If you paddle along the lakeshore, damselflies will often land on your boat, and dragonflies will swoop by while mating in flight. 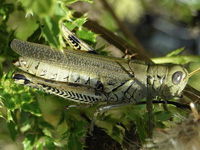 Many species of the order Orthoptera create sounds that are synonymous with summer evenings. These insects produce sound by rubbing a “file and scraper” together on the front edges of their forewings. Most species have well developed rear legs that are used for jumping. The katydids (3.2) are large, green long-horned grasshoppers with long antennae. Males have a raspy call that can be heard in trees during late summer evenings. A recent study has identified 70 species of short-horned grasshoppers (3.1) in the state. Snowy tree crickets and field crickets can also be found on the lakeshore property.

The order Hemiptera includes many common insects with sucking mouthparts. The rise and diversification of this order in Earth’s history coincides with that of the vascular plants. Thus, most species, like aphids (4.1), scale insects, leafhoppers (4.2), and spittlebugs (4.3) feed on plant sap. Some aphids are commonly seen with ants that protect them in return for honeydew, a sticky, watery, sugar-rich excretory product most aphids produce abundantly. Immature cicadas (8.4) dwell underground, feeding on plant sap obtained through the plant root system; 4.5 stink bug nymph adults (4.4) are arboreal and make the sometimes nearly deafening “buzzing” sounds often heard in mid- and late summer. 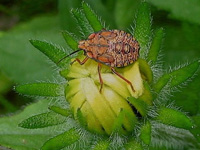 One of the suborders of Hemiptera is the Heteroptera, or “true bugs“. Most members of this large and common suborder, like the stink bugs (4.5 pictured, 4.6) produce smelly defensive chemicals through “scent glands”. The black and orange milkweed bugs (4.7) commonly seen on milkweeds and on milkweed pods in late summer and fall feeding on the endosperm of milkweed seeds with their sucking mouthparts. Another late summer member of this group, the yellow and black ambush bug, is common on goldenrod and similarly colored flowers, where it is well camouflaged in stalking prey. Some common aquatic bugs include the water boatmen, back swimmers, giant water bugs, and the very familiar water striders that skate across the water surface. 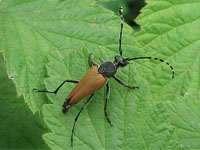 The four largest and most diverse groups are the beetles, wasps, moths and butterflies, and flies. Beetles (Order Coleoptera) represent the largest order of insects, or anything else for that matter. Some 350,000 species have been named, and it is estimated as many as a million or more are still to be discovered and formally named.

Incredibly, the weevils and bark beetles, the single largest beetle family, boast nearly 65,000 species. Beetle success has been due largely to their ability to occupy a wide array of ecological niches: aquatic, terrestrial, predatory (like most ladybird beetles: 5.1), parasitic, plant- and fungus-feeding. Some of the microhabitats they occupy are extremely specialized. This ability has probably been enhanced by their generally compact, heavily armored bodies. 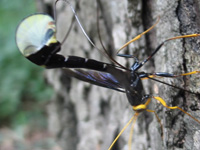 Wasps, ants, and bees comprise a very diverse order (Hymenoptera), and include some of the insects with which we come into most frequent contact. One of the most frequently encountered groups includes the yellow jackets and hornets (8.1). Although they may seem frightening, they only sting when threatened. These are highly social insects, with sophisticated division of labor. They begin founding their nests in the spring, and populations become highest in late summer. These insects play a valuable role as predators of plant-eating insects.

Bees are among the most important pollinators. For example, bumble bees (8.2) are the major pollinators of many prairie plants, and so serve as an important component of prairie restoration.

Perhaps the least familiar but most diverse group are the parasitic wasps. The females insert their eggs into another insect. The larvae then emerge inside their food supply and eat their way out, killing the host. There are parasites of almost all insect groups, regardless of how protected their habitat may seem (8.3 Ichneumon wasp at right).

Parasitic wasps play a crucial role in biological control and organic farming. Without them, the Eagle Heights Gardens would be under constant pressure from plant-eating insects!

Moths and butterflies (Lepidoptera) have a fine powder-like scaling on their wings (7.1) that gives them colorful markings and makes them “living jewels.” There are over 150 species of butterflies (7.2, 10.3) and 10 times that number of species of moths (7.3) in Wisconsin. The larvae, called caterpillars (7.4), are eating machines that process 2-3 times their weight a day in plant tissue. Most species of plants have at least one species of Lepidoptera that feed on it. Conversely, each caterpillar species (7.5) has a limited number of host plants on which they can successfully feed. The adults often feed on flower nectar, but some species are associated with carrion and others do not have functional mouthparts and need to live on food reserves stored up by the larvae.

The Diptera, or “true flies,” are unique. As their ordinal name, Di (= two) + -ptera (= wings) implies, adult flies have a single pair of wings, whereas most other flying insects are equipped with two pairs. Nonetheless, members of this group are among the fastest and most acrobatic fliers in the insect world. This has been achieved in part by the evolution of “halteres.” Originally serving as hind wings, these structures have become highly modified through time into exceedingly complex and delicate balancing organs. 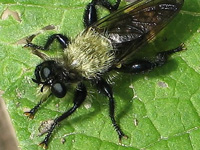 Flies have sucking mouthparts and these generally take the form piercing stylets, such as in blood-feeding individuals like female mosquitoes, deer flies, and black flies or as in predatory flies, such as the robber flies(pictured). Other flies take in fluids by means of a “sponging” or “lapping” mouthpart modification, such as the house flies and many of their relatives (6.2 in the photo album showing a fly as well as a long-horned beetle that mimics an ant).

Some of the first insects you see flying in the early spring are midges. These form mating swarms, in which they use almost any object, including you, as a focal point for getting together. They are often mistaken for mosquitoes, but do not bite.

In addition to insects, there are many types of spiders, millipedes, centipedes, and mites that you can observe. Spiders are predators; some use webs to snare prey (11.1), while others lie in ambush in places insects visit (11.3). Spiders often tend to their egg masses (11.2) instead of leaving the eggs. Millipedes and centipedes might look the same but do differ. Millipedes have more than one leg pair per segment while centipedes have only one pair per segment. As for lifestyle, millipedes are typically scavengers while centipedes are predators. 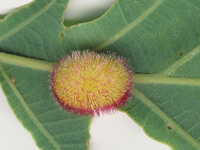 There are many occasions when you may not see the insect itself, but will rather see signs of it. Such signscan be quite useful in determining exactly what insect was here and what it was doing.

For example, you may see the insects nest, as with the yellow jacket (see 8.1 in the photo album). Other insects such as bark beetles and wood borers leave galleries behind as they tunnel through wood. Sometimes insects leave behind evidence of their earlier life stages, such as the cocoons of moths and butterflies, or a cast skin, as with cicadas (8.4).

One sign that you might not immediately recognize as being of insect origin is a plant gall (9.1 pictured, 9.2, 9.3). These are caused by insects and mites that stimulate abnormal plant growth, and then use this new structure for shelter—genetic engineering at its finest! Most are quite recognizable by their shape and color. 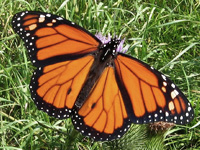 How insects spend the winter in the Preserve

What happens to insects during the winter months? A handful of species like the common monarch butterfly(10.1 pictured and 10.2) and potato leafhopper do not overwinter here. However, the vast majority remain here year around.

Yes, most of our insect fauna spends these months in a metabolically inactive manner, just like a number of the vertebrate species with which most of us are more familiar. But, should you venture out for a nice, crisp winter’s hike in a snow-covered forest, especially on a relatively sunny day, take an insect’s eye view of the landscape around you.

You might come upon a depression in the snow made by some woodland vertebrate—or another hiker—that upon close examination literally “springs” up at you with very tiny jumpers. These are called springtails (Class and Order Collembola), or “snowfleas”. These 6-legged, near-insect relatives are incredibly abundant year around, mostly feeding as decomposers. But during the winter, with a wee bit of “tracking snow” these tiny specks are actually easier to spot than during other times of the year. The best time to see them is after a fresh snowfall on a sunny day.

You could also happen upon some bizarre, wingless winter crane flies (Order Diptera, family Tipulidae, genus Chionia), or perhaps an even less commonly encountered winter scorpionfly (Order Mecoptera, family Boreidae, genus Boreus). On an even more mellow evening during a mid- or late-winter thaw, it is even quite possible to see butterflies, moths, and certain other insects like leafhoppers, flies, beetles, and many spiders (arthropod relatives to the insects) checking out their haunts.

Many insects have been accidentally, or in some cases deliberately, introduced from one region to another. These insects often cause problems in the new area, because their major predators and parasites remain behind, or because local plants have not evolved resistance to them. 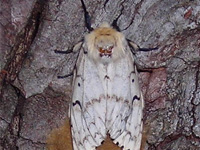 The Lakeshore Nature Preserve is threatened by a variety of alien insects, each of which causes its own set of problems and affects specific areas. Some of the most damaging insects threatening the wooded areas are the gypsy moth (12.2 pictured), a leaf feeder on deciduous trees, and the smaller European elm bark beetle, a vector of the fungus that causes Dutch Elm Disease.

We are particularly wary of a new pest, the emerald ash borer (12.1). It has killed millions of ash trees in neighboring states, and could strongly affect the more bottomland sites in the Preserve.

For those who grow vegetables in the Eagle Heights gardens, the Japanese beetle is a constant nuisance (8.5).

Some invasive insects cause indirect problems. For example, the multi-colored Asian lady beetle can be both a nuisance with its early autumn swarms, and a threat to biodiversity by displacing native species.

Read a web article by Jill Feldcamp on “An overlooked insect: the dragonfly”

A great resource for people wishing to learn more about insects is www.insects.org.

Visit Insects of the Lakeshore Nature Preserve: a photo album.