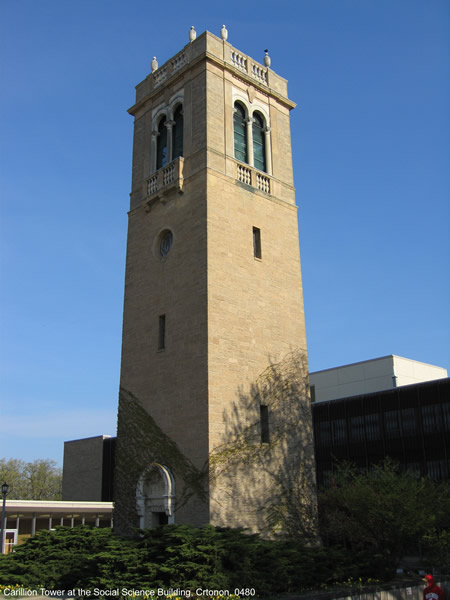 After a disastrous fire in 1916 destroyed the dome that once crowned Bascom Hall, successive graduating classes of UW alumni sought to raise funds to rebuild the dome, along with a set of carillon bells to be housed in it.

In 1931, Arthur Peabody, the state architect who probably did more to reshape the early twentieth-century UW campus than anyone else, declared that for structural and aesthetic reasons, the dome would never be rebuilt. Because significant alumni funds had already been raised, the decision was made to erect a carillon tower instead. The tower was completed and the first concert held in 1936.

Although new bells have been added over the years and the playing console has changed, this remains one of the most distinctive features of the Madison campus. Until the controversial construction of the Social Science Building in the early 1960s, the Carillon Tower was surrounded on all sides by woodland, now called Muir Woods.

If you look just east of the tower, you’ll find a monument to the Sauk Indian Chief Black Hawk, whose flight in 1832 through the Madison area with U.S. militia in pursuit represented the last armed conflict between native peoples and the United States Army in southern Wisconsin. Black Hawk’s retreat ended in two tragic massacres, one near modern-day Sauk City, the other near modern-day Lacrosse.

Read about the last carillonneur in “He Tolls for You”…