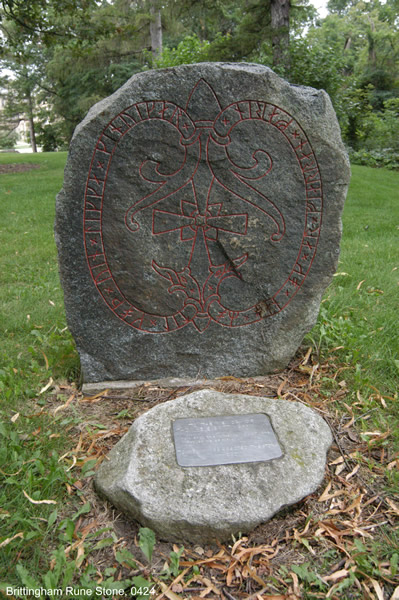 Muir Knoll has long been a place of memory. Try to see how many commemorative stones you can find in this vicinity. Some of the oldest, dating back to the end of the nineteenth century, are between the edge of Muir Woods and Observatory Drive where the path first heads out toward the edge of the knoll. The variety of stones has made this a destination for geology classes for many years. Something special about the knoll and this fringe of woods seems to attract commemorative placements.

One of the most remarkable of these stones is carved with Viking runes in honor of Thomas Brittingham, Jr., located near the far end of the knoll. The Brittingham family has long been among the most generous benefactors of the University of Wisconsin. Indeed, Eagle Heights Woods, at the far western end of the Preserve, would not belong to the university or be part of the Preserve at all if it were not for the far-sighted generosity of Thomas Brittingham, Jr. He acquired the Eagle Heights Woods property after the death of Edward Young—former owner of the estate at the base of Picnic Point—and gave it to the university to benefit future generations forever.

This same man was responsible for creating one of the university’s most remarkable scholarship programs in the 1950s: “the Brittingham Vikings,” which brought students from Scandinavia to study in Madison at the expense of the Brittingham family. The program proved immensely successful and popular, and is no doubt one of many reasons why UW-Madison continues to have one of the leading Scandinavian Studies Programs in the United States.

Thomas Brittingham, Jr., died suddenly of a heart attack on April 16, 1960. In his honor, the “Brittingham Vikings” students he had supported placed this stone in gratitude for all he had given them. Translated, this 250-pound Swedish runestone – traditionally created to honor a lost leader – reads: “To a good friend the way is not long, though he be far away.” 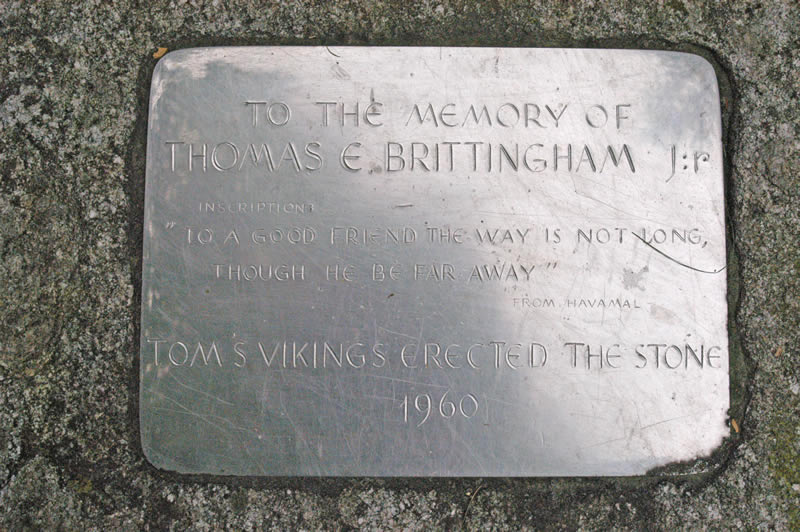 Learn more about the Brittingham family in a UW-Madison online history exhibit..