Bill’s Woods consists of a broad rectangle of wooded land between University Bay Drive and Eagle Heights Community Gardens. The eastern third of the tract was an established woodland before 1930, but in the late 19th and early 20th centuries, the western two thirds was both cropped and grazed as part of a working farm. Later, the central and western parts of the area were used for agricultural research and part of the eastern third was used as a storage area for campus landscaping operations, an activity that threatened the older part of the forest.

The present forest in the western two-thirds of Bill’s Woods has come into being as a result of half a century of regrowth. After persuading the university to move its storage activities away from the older part of the forest, a dedicated group of volunteers from the Friends of the Lakeshore Nature Preserve has been working steadily since the late 1990s on a series of restoration projects here to return the older eastern portion of Bill’s Woods to a more diverse native plant community.

The eastern third of Bill’s Woods is one of the few parts of the Lakeshore Nature Preserve that was an established woodland before the 1930s. The woods extended east of the present service road and included part of the base of Picnic Point below the cedar-covered hill. By the 1890s, part of the original Madison Park and Pleasure Drive Association carriage road cut diagonally a little to the west of the original woods, and the route is still present as a paved road open to walkers and bicyclists.

Eastern Bill’s Woods (the 6.5 acre portion located to the east of the fire lane) is a mixed deciduous woodland, with a canopy of white, red and some bur oak, hickory, and other deciduous trees, almost all of which developed in a woodland setting rather than in an open area. The understory layers, before restoration, were less diversified, the original native plants having been largely replaced by non-native shrubs and saplings. The two middle and western portions of Bill’s Woods have had a checkered history, having been long used for agriculture and other purposes. The westernmost part of Bill’s Woods still had three large agricultural fields in use in the 1960s.

There are three soil pits in Bill’s Woods. These soil pits were excavated more than fifty years ago and used as part of a field trip for the 6th World Congress of Soil Science, held in Madison. Today, the pits continue their educational role as a training model for classes in Soil Science, Geography, and Geology. They show us that soils support life and have distinct differences depending on their setting-differences that play important roles in sustaining different ecosystems.

The section of the Eastern Bill’s Woods just south of the Physical Plant Storage area (“Upper Bill’s Woods”) became part of the Physical Plant Ground Department work area in the 1990s. Trees were bulldozed and this now open section was piled with mulch, gravel, and other work materials. In 1999, before the formation of the Friends of the Lakeshore Nature Preserve, volunteers Glenda Denniston and Roma Lenehan lobbied to have Grounds remove the work materials and re-grade the area (which was done in the spring of 2000), and received permission from the Field Manager to begin restoration of this bare section, continuing the work they had started in the still-wooded portions nearby. In the fall of 2001 the bare ground was seeded with a mix of savanna seeds from Tom and Kathie Brock’s Black Earth Pleasant Valley Conservancy, and many other open-area plants were added.

The Friends of the Lakeshore Nature Preserve “Eastern Bill’s Woods Project” is a continuation and expansion of two previous projects: 1) the original 1999 “Upper Bill’s Woods Project” and 2) the “Entrance Project,” begun by the newly-formed Friends group in the southeastern section of Bill’s Woods in 2002. Thousands of invasive shrubs and trees have been and are still being removed. Invasive plants are gradually being replaced with native understory trees and shrubs such as Dogwoods, Viburnums, and Hornbeam as well as by thousands of herbaceous plants. Plants are obtained from local native plant nurseries and are grown from seed in a campus greenhouse by volunteers.

In 2003 the Friends received a five-year permit to continue and extend their restoration work to include the entire 6.5-acre eastern portion of Bill’s Woods. Careful written and photographic records of plant and animal life in Eastern Bill’s Woods have been and are being kept by the Friends.

Invasive plants continue to be an issue and are removed as part of the Preserve’s annual workplan. However, the hard work of the many volunteers over the years is evident when you look at the groundlayer.

Upper Bill’s Woods is best visited in the late summer and fall, when there is a profusion of savanna plants in flower, many over ten feet high. Birds and butterflies are abundant. 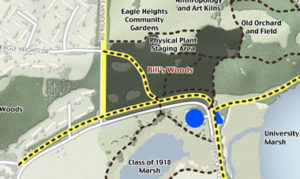 Since Bill’s Woods is just to the west of Picnic Point, most people already know how to get to it. From the entrance to Picnic Point, instead of continuing straight to Picnic Point, take the main Service Road which begins at the iron gate in the decorative stone wall. Eastern Bill’s Woods is to the left of this road, and evidence of the Friends’ restoration efforts should be clearly visible there. A sign at the southeastern corner of Bill’s Woods explains the restoration project. At the first road intersection take a left and you will be following the north edge of the project. If you walk or bike west from the Picnic Point entrance along University Bay Drive, you’ll also be able to view Bill’s Woods to your right, and the paved diagonal pedestrian and bicycle route to Eagle Heights Community Gardens can be used to cross the interior of Bill’s Woods.

Take the Lakeshore Path from Oxford Road (west end of path) or Park Street (east end of the path) to the Picnic Point entry. Either park your bike and proceed on foot up the main Service Road and then left at the first intersection, or proceed west along University Bay Drive to the paved diagonal bike and pedestrian route (originally a segment of the Madison Park and Pleasure Drive Association carriage road) cutting north through Bill’s Woods, ending at Eagle Heights Community Gardens.

Follow the directions above from the entrance to Picnic Point.

The closest parking for Preserve visitors is located at Lot 130 near the Class of 1918 Marsh and the main entrance to Picnic Point.