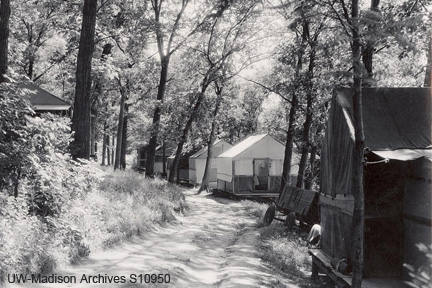 Members of the Class of 1955 were thinking about a class gift even before they gathered to plan a fiftieth reunion. Class leaders had begun to focus on the beautiful but long neglected area of the Preserve then known as North Shore Woods. The Friends of the Lakeshore Nature Preserve prepared and presented to class officers a proposal for restoring this area, which extends along the Lake Mendota shore for almost half a mile from Frautschi Point to Raymer’s Cove.

This portion of the Preserve is biologically important. It is traversed by a delightful rustic path. It offers lake views and access. And it has a colorful history. Although that history has almost been forgotten by many at UW-Madison today, it was well known to many members of the Class of 1955.

The North Shore Woods (on the south shore of Lake Mendota and, thus, confusingly named) was the site of the UW’s Tent Colony. Here, for half a century–from 1912 until 1962–married students and their families occupied tents on University-supplied platforms during the summer session. The University provided wells, privies, and eventually even electricity. An old cottage on the east end of the woods was the summer home of Albert and Eleanor Gallistel, who supervised the Colony through most of its years and set the tone for happy and healthy summers on the lake. The Colony grew to as many as 200 residents, almost a third of them children. The children could enjoy an idyllic life on the lake while one or both parents studied for graduate degrees, sometimes traveling to their studies by ferry boat!

Teaching excellence and the Preserve

Some years earlier, the Class of 1955 had committed to a gift to support UW-Madison’s Teaching Excellence program. The Class Committee believed, however, that their members would be supportive enough of the Lakeshore Preserve proposal to want to fund it and the Teaching Excellence program simultaneously. They did this and more: the class eventually presented the University with one of the largest class gifts in UW history.

The Class funded a bold proposal to restore the North Shore Woods. Invasive species would be removed. Native Wisconsin plant communities would be re-established. Erosion problems would be addressed. The path would be improved. Views and non-destructive access to the lake would be provided.

Furthermore, the Class asked that these lands be given the historically significant name “Tent Colony Woods.” The renaming was accomplished in 2005 and, in 2006, restoration work began in earnest. (This work benefits from a management plan developed for projects funded by the classes of 1953 and 1963.)

The Class of 1955 went beyond these efforts and incorporated a component that will benefit the University and all of its friends, visitors, and neighbors for generations to come. It directed that a portion of its gift be used to establish a Stewardship Endowment Fund to provide permanent income for the Lakeshore Nature Preserve. This was accomplished in 2006 with $50,000 from the Class of 1955, a generous amount above and beyond their contributions to Teaching Excellence and to the Tent Colony Woods. Simultaneously, a companion Stewardship Fund was established to provide non-endowed funds to support much-needed current expenditures.

Assuring the future of the Lakeshore Nature Preserve

The Class of 1955 has made a bold and lasting mark on the Preserve. A major segment of the Lake Mendota shoreline is being restored. The historic past of Tent Colony Woods has been identified and remembered. The still rustic hiking trail here has been incorporated into the Lakeshore Path that now extends for over four miles along Lake Mendota .

Perhaps of greatest importance, the Class of 1955 has given a challenge to future donors: Funding the restoration of Preserve lands benefits all of us, and the two new Stewardship Funds can play a critical role in enabling that work to be done into the indefinite future. The Class of 1955 has thus helped chart a path in Tent Colony Woods that will wind up benefiting the entire Preserve.

Learn how you can contribute to the Preserve here.